The armor  on the Audacious prevents damage through the process of ablation, the removal of material from the surface of an object by vaporization, chipping, or other erosive processes. In contemporary spacecraft, ablative plating is most frequently seen as an ablative heat shield for a vehicle that must enter atmosphere from orbit, such as on nuclear warheads, or space vehicles like the Mars Pathfinder probe. The idea is also commonly encountered in science fiction.

Ablative armor is distinct from the concept of reactive armor which is actually in common use in modern armored vehicles.

Space colonies and ships of the future will almost certainly require a type of ablative armor to withstand space radiation and heat. When traveling at higher speeds the momentum of the particles the ships will encounter will be large, and require more protection. 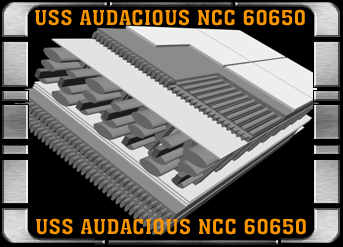 Ablative armor frequently appears in the Star Trek universe. It was introduced in the Star Trek world in the year 2371. The USS Defiant was equipped with ablative armor in Star Trek: Deep Space Nine. The Star Trek: Deep Space Nine Technical Manual explains that it works in two stages: when the shields are hit by an energy or particle weapon, phaser or thermal energy from the ship is dissipated across the hull. This creates a boil-off rate that carries away most of the incoming beam's energy. Most of the time the boil-off creates a particle cloud that is dense enough to disperse the incoming beam. The USS Prometheus from Star Trek: Voyager was also equipped with ablative hull armor.

Ablative armor is used in the series finale episode of Star Trek: Voyager  in which a future Admiral Janeway travels back in time and brings ablative armor along with a new armament of "transphasic" torpedoes to help Voyager bypass the Borg threat and allow the crew to get home sooner than her past self Captain Janeway did.

Regenerative ablative armor is a similar type of armor that adds power to the armor to be able to withstand more hits, it is similar to shields in the fact that it can be recharged.