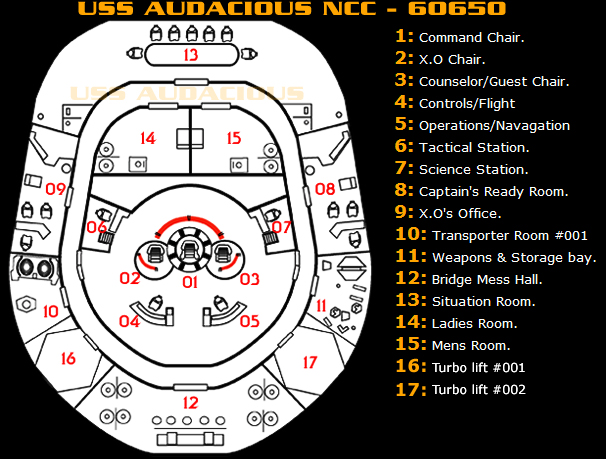 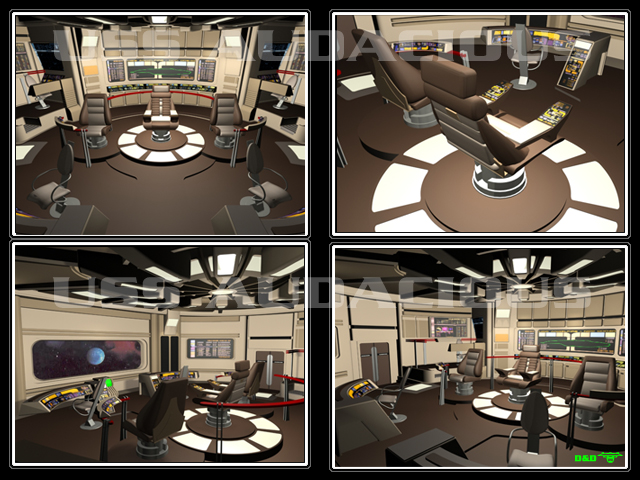 General Overview: Primary operational control of the Aggressor Class is provided by the Main Bridge, located  just under the topmost area of the saucer section.

Layout:  Due to the profile of missions the Aggressor Class typically undertakes, the bridge aboard this class of ship is designed for free range and ‘strategy tank’ style management. Much of what the ship does is interrelated to a significant amount, and allowing the ship’s top officers to interact freely in a work environment helps the missions to operate at peak efficiency as a opposed to ships that operate ‘under sail’. 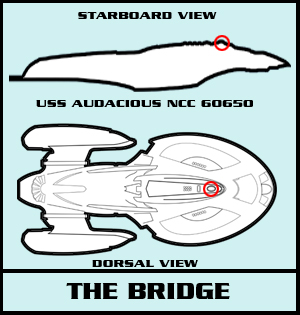 The ship’s commanding and executive officers have chairs at the very center of the circular bridge in a submerged location. In this manner, the bridge helps the idea that there is ‘work’ being done and the command staff are an integral part of it, rather than the overseers.

The captain’s chair is starboard side, and the executive officer’s is on the portside. Between them is a console built into the structure that provides a place for information dissemination, as well as operational command of the starship. On either side of the command and executive officer’s chairs, are smooth benches, an architectural element that can be used when necessary by extra officers on the bridge, as well as visitors and other personnel by the permission of the command staff.  Directly ahead of the command area and down into a further sunken area, is the Conn. This split console is just forward of the viewscreen and houses enough space to be used in the traditional Conn/Operations arrangement where necessary. Under most conditions, the entire console is used for Helm/Navigation and Operations is managed by one of the other stations.