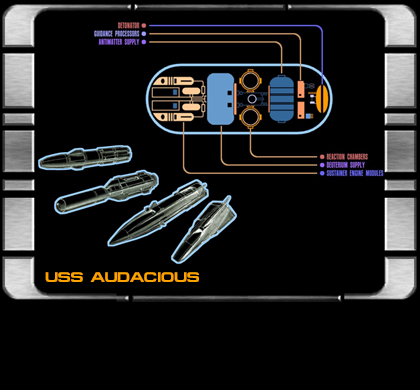 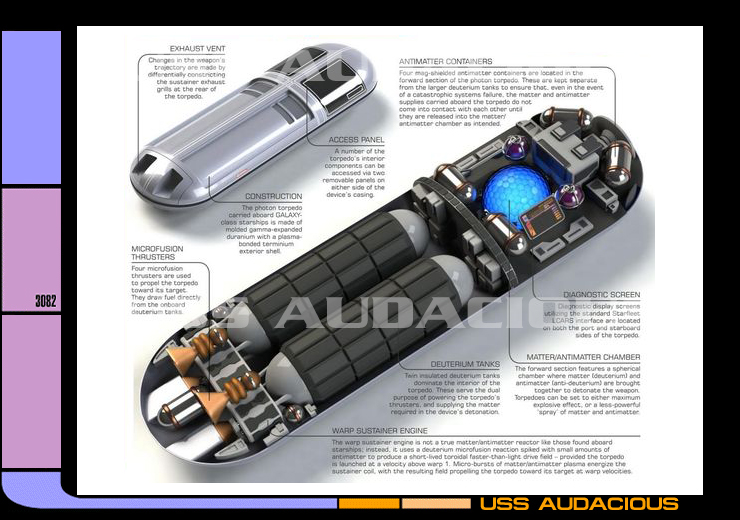 Mark 9: A torpedo is a self-propelled, self-guided weapon. Torpedoes of some type were part of the standard weaponry of most Starfleet vessels in the 22nd to 24th centuries.

Torpedoes were primarily used in space combat as an alternative to directed energy weapons such as disruptors and phasers. Torpedoes could be configured before launch to fit various specifications. Normally a torpedo was equipped with a warhead, and the explosive yield of this warhead could vary depending on the type of torpedo. Torpedo launchers brought the weapon into the launch tube and allowed fire control from the ship's bridge, although a torpedo could be launched manually. Most of the time a tactical officer was responsible for target acquisition and launch sequence.

According to Star Trek: Deep Space Nine Technical Manual (page 92), torpedoes, like auxiliary craft, were equipped with shield window transponders. This allowed them to be launched while the shields were active, as they passed through during a window in the shields. Canonically, the concept of shield windows was introduced in the Star Trek: The Next Generation episode "The Wounded", where such things as beaming are possible for 1/50th of a second between sensor systems cycles.